Tackling the links between social media and youth violence 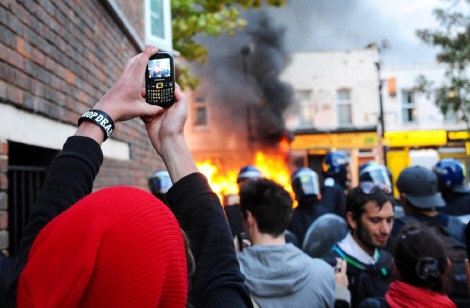 Social media plays a very central role in the lives of young people in the UK today. While it creates opportunities, this brave new world brings with it some very serious safeguarding challenges for professionals working with young people. Two years ago, the charity Catch22 published a report which examined the link between young people’s use of social media and youth violence.

That report identified a number of worrying trends:

No holds barred online: Hidden from adults, a virtual free-for-all space has emerged in which a small minority of young people share material that both displays and incites serious incidents of violence in real life.

Growing audience: Historically incidents of violence, disrespect, and provocation were typically confined to those present, as well as a single location and point in time. Now displays of violence and disrespect are captured via photographs and videos, and spread virally over multiple platforms.

Violent intent is the exception rather than the norm: The vast majority of young people do not want to live the violent and risky lifestyles that are glamourised across social media.

Exposure to ongoing online violence: Young people are exposed daily to social media content that displays or incites serious violence in real life. These include uploads of photos and videos of individuals and groups trespassing into areas associated with rival groups, and serious incidents of theft and violence perpetrated against young people.

Vulnerability of young women: Professionals and young people reported examples of girls being attacked by members of rival groups after appearing online. In addition, professionals described cases in which young women who commented on content uploaded to social media were subsequently groomed and pressured into risky activities such as holding and storing weapons or drugs.

Negative implications for education and employment: Tens of thousands of young people follow the social media accounts of people self identified as “gang members”. This continuous lens into a seemingly lucrative lifestyle can undermine the commitment of some young people to education and legitimate forms of employment.

Last month, Catch22 in partnership with Redthread, a youth work charity, launched a new service to tackle this problem.

The Social Switch Project has been designed to switch the story on how social media’s relationship to youth violence is understood, tackled and solved.

It is based on the knowledge that simply limiting young people’s use of social media will only drive their online activity behind closed doors, where it cannot be monitored or challenged. It is far more valuable to create the space for open and honest discussions between young people and those they trust.

The Social Switch Project is delivered in three strands:

Training frontline professionals who work with young people. By understanding how popular platforms operate, what the risks are, and why these creative platforms are so popular, frontline professionals will be able to productively talk about social media; they will be able to embrace the digital opportunities social media presents for young peoples’ futures.

Training young people to be future digital leaders. A three-week programme using experiential learning, live project briefs and networking opportunities will unlock young peoples’ existing skills and provide insight into the power of social media. A career coach will then work with young people to progress them into creative careers.

Providing grants and support for community projects across London.

The final strand of the programme recognises that there is already great work being done in the field of preventative youth violence. Individuals and grassroots organisations have the ideas to divert vulnerable young people from harm, but they often struggle to find funding that does not require lengthy applications or substantial reporting processes. The Social Switch Project is offering small grants to help launch these ideas or to scale up existing projects which offer young people positive activities and bring London’s communities together.

Readers can get involved by visiting thesocialswitchproject.org.uk to find out more on how to:

Apply for a grant for your grassroots project